El-Rufaí said in Kaduna through his media aide, Samuel Aruwan, that the former President had failed to justify why he released the fund only to his cronies instead of all the states.

The governor lamented that instead of addressing the moral issues raised in the interim report of the investigation instituted by the National Economic Council, Jonathan chose to resort to personal attacks.

“He is not a man that can take responsibility for anything.

“In March 2015, not long after making concession call to President Buhari, he summoned his pecks and ask them to reject the result of an election whose winner he had congratulated in private.

“That effort and publicity failed spectacularly and the will of people prevailed.

“So no one should be surprised that he is denying presiding over the discrete distribution of the ecological funds.

“His denial begs the question, what special circumstance ensured that only states that were controlled by the PDP and its allied parties qualified for the N2 billion each.”

El-Rufa’i accused Jonathan of running Nigeria while in power for his party and family. 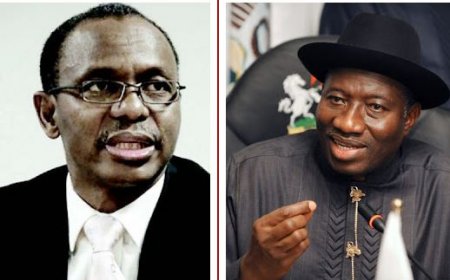 “Jonathan cannot argue with fact that the payment are in the record of ecological fund.

“He knowingly engaged in discriminatory disbursement of federal fund; the legality of that is open to question.”

He dismissed as disingenuous, the former president’s argument that money was also disbursed for the Green Wall Project in some northern states.

El-Rufa’i also noted that Jonathan had failed in his response, to show where he lied regarding the disbursement of N2 billion to each of the affected states as contained in the NEC interim report on the utilisation of the Ecological Fund.

The governor reminded the former president that the investigation being carried out was at the instance of NEC and not a personal initiative.