Mr. Jonathan challenged those in political leadership to commit to making a difference in the lives of the people.

He said speaking when he visited the Governor of Rivers State, Nyesom Wike, at the Government House, Port Harcourt, the state capital over the weekend. 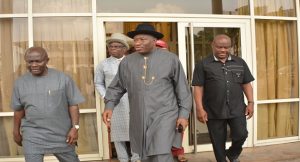 Also present during the visit were the Chief of Staff to the governor, Emeka Woke, the Secretary to the Rivers State Government, Kenneth Kobani and the Edo State PDP Chairman, Chief Dan Orbih.

The former President commended the governor for his developmental strides in the state, adding that Wike shared some similarities with him in terms of the desire to always make a difference when in office.

Thereafter, he expressed gratitude to Nigerians for accepting his person (Jonathan) even after leaving office.
A

May 28, 2021
ese
E
E
Politics "I get malaria, na cancer I dey find" - Gov Nyesom Wike of Rivers state speaks on why he can never defect from PDP to APC - Linda Ikeji's blog