Atletico’s players celebrate with the trophy after the UEFA Europa League final football match between Olympique de Marseille and Club Atletico de Madrid at the Parc OL stadium in Decines-Charpieu, near Lyon on May 16, 2018.

Antoine Griezmann was the hero for Atletico Madrid as the French striker scored twice in their 3-0 win over Marseille in Wednesday’s Europa League final in Lyon, allowing his club to win.............. 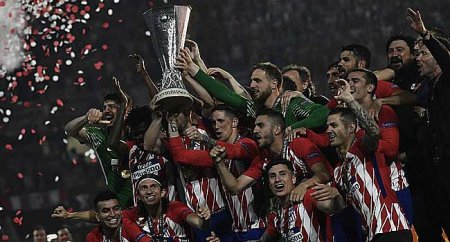