A top official in Hamas, Salach Al-Aruri has disclosed that his militant group, Al-Qassam Brigades was behind the kidnapping of the three Israeli boys who were found dead in June.

Prior to the disclosure, Hamas had denied culpability in the kidnap and murder of the three Israeli teenagers.

THE JEWISH DAILY FORWARD reported that during a conference organized by the World Association of Muslim Scholars in Turkey, and aired on Israeli television Wednesday, Al-Aruri said, "There was much speculation about this operation, some said it was a conspiracy,” Al-Aruri told delegates at the conference. The popular will was exercised throughout our occupied land, and culminated in the heroic operation by the Al-Qassam Brigades in capturing the three settlers in Hebron.

"This was an operation from your brothers in Al-Qassam undertaken to aid their brothers on hunger strike in (Israeli) prisons,” he added.

Jewish teenagers, Eyal Yifrach, 19, Gilad Shaer 16, and Naftali Fraenkel, 16, were abducted while hitchhiking in the Israeli occupied West Bank on June 12 and killed.

Israel had accused Hamas. Hamas leader Khaled Meshaal, who is in exile in Qatar, denied knowledge of the abduction but praised its perpetrators. 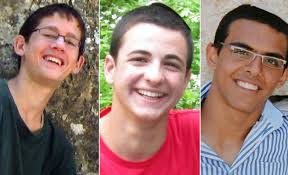