Senator Dino Melaye, On wednesday's plenary during the briefing of the Comptroller General (CG) of Nigerian Customs Service Col. Hameed Ali (retired), has said that a court process cannot stop any form of Government from carrying out Constitutional duties.

The CG who was sent away last week for appearing in mufti, did not appear before the Senate today for legal reason. 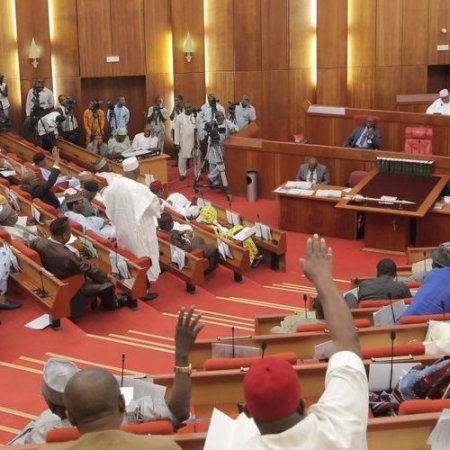 A maritime lawyer, Muhammed Ibrahim, filed a lawsuit on Monday at the Federal High Court Abuja against the senate’s decision.

Dino during his presentation said that the position of the CG is a rank and anyone who occupies that rank is a civil servant as such Hameed "is not fit to be the CG of Customs" because according to the civil service rule he has passed the civil service retirement age.

He called on the president Muhammdu Buhari to adhere to the rule of Law.
A

At least we're entertained amidst the recession
E

Jules said:
At least we're entertained amidst the recession
Click to expand...

Abi ohh, @RemmyAlex says we are no longer in recession - https://www.nigerianbulletin.com/threads/nigerian-economy-climbs-out-of-recession.235542/
P

Jules said:
At least we're entertained amidst the recession
Click to expand...

ese said:
Abi ohh, @RemmyAlex says we are no longer in recession - https://www.nigerianbulletin.com/threads/nigerian-economy-climbs-out-of-recession.235542/
Click to expand...

Yes, Recession is already packing its load and luggages. Buhari is sending it away.