The incident happened immediately after the boy sneaked out the boarding school campus to meet up with his parents, who waited for him near the facility to give him some food and stationary.

But when he returned to the hostel an infuriated headmaster beat him so hard for not asking for permission to leave, he lost his conscience.

But instead of rushing Shamim to hospital the school authorities took him to a nursing home, which is also their property. And only when the boy’s condition seriously deteriorated he was hospitalized but it was too late. 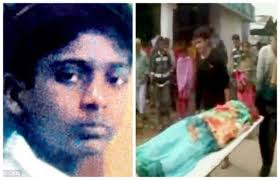 The boy’s distraught mother said: “He was our only son. We work hard so that we can send him to school because we wanted him to get a better education. They killed my child. I want to see the offenders being hanged.”

According to local media reports, the parents were informed about their child’s death by hospital staff, while the school authorities tried to hush up the killing claiming the boy simply had fallen ill.

The incident sparked public outrage as villages staged protests and blocked roads near the school, demanding punishment for the accused. The hostel was closed, the headteacher and the school’s owner were arrested. Police launched a murder investigation.