The directive was contained in a letter to Emeribe by the Minister of Health, Prof. Isaac Adewole, dated Feb. 19, 2016.

The letter signed on behalf of the Minister by Dr Patience Oshinubi, the Head, Department of Hospital Services in the Ministry stated that Emeribe should hand over to the most senior Director in the council.

“The Honourable Minister of Health has approved the advertisement of the post of the Registrar/CEO of the Medical Laboratory Science Council of Nigeria.
In view of the above, I am directed to inform you to hand over the administration of the council and of government property under your purview to the most senior Director in the council, with immediate effect. Please, accept the assurances of the Honourable Minister of Health’s best regards,’’ the letter read. 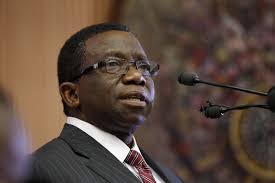 Meanwhile, Emeribe has acknowledged the receipt of the letter in a telephone interview with the News Agency of Nigeria (NAN).

The professor, whose second term of four years as Registrar/CEO of the council ought to end in 2018, however, said that the letter was “sub judice’’.

He said there were subsisting cases in court in respect of the advertisement of the position of the Registrar/CEO of the Council, awaiting judicial determination.