Goji Mohammed, a witness in the Federal government's case against former Air Chief Alex Badeh has revealed how bundles of dollars were found hidden in a kettle at Badeh's home. 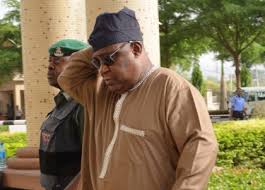 Daily Trust reports that Mohammed, who was led in evidence by EFCC counsel, Rotimi Jacobs (SAN) narrated that operatives of the anti-graft agency swooped on Badeh’s second house at 6 Ogun River Street, Maitama, Abuja and discovered a pack of kettle filled with 16 bundles of $50, 000 each, and another two sealed bundles of $100, 000 each making a total of $1 million in his bedroom upstairs.

The kettles containing the money were reportedly found at Badeh's home - 2 Nelson Mandela Street, Asokoro, Abuja where documents for landed properties were recovered.