Sports How Mikel, Other Players Stopped Siasia From Resigning After Sweden Victory

Curators
Head coach of Nigeria’s U-23 team, Samson Siasia, was ready to step down from his role after the 1-0 win over Sweden on Monday morning, but for the intervention of captain, Mikel John Obi. 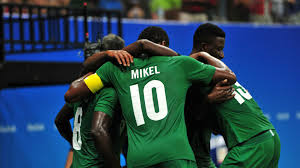 A top source in the team told AfricanFootball.com: “Siasia wanted to quit his post after the win over Sweden, but the players led by Mikel begged him to rescind his decision.

“The coach complained that he has been badly treated by the authorities, he has not been paid for five months and his team have not received the necessary support to succeed.”

Siasia had openly complained about poor working conditions before the 2016 Olympics and things got out of hand, after the team was abandoned at their training base in Atlanta, USA.

The outspoken coach reportedly snubbed calls from the Sports Minister, Solomon Dalung and called the vice-president, Yemi Osinbajo, directly to complain about their plight.

The Dream Team VI face Colombia in their last Group B fixture, having qualified for the quarter-finals, thanks to victories over Japan and Sweden.