Entertainment How My Wife Toasted Me – Popular Actor, Yemi Solade

Popular yoruba actor, Yemi Solade has in a recent interview on a television show opened up on his marital issues, and how he met his current wife. Solade got married to Hannah Marsh, an half caste after his first wife left him and went abroad. 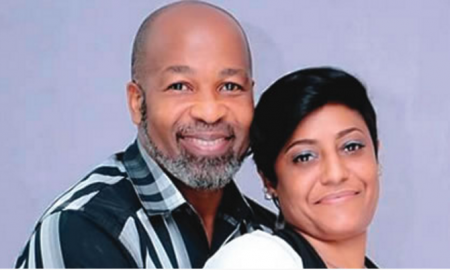 Asked on how he met his wife, Hannah Marsh, Solade said “My wife actually toasted me. I had previously been married, but my first wife left me and went abroad. I met my current wife on the set of Wale Adenuga’s Super Story. God indeed has a sense of humour because I met two half-castes that year, Lilian Bach and Hannah Marsh. Lilian played my wife, while Hannah acted as my secretary in that particular production. I liked Hannah, but I initially did not want to get involved with half-caste ladies because I felt they are expensive to maintain, and only rich men can handle them. However, we met again and unknown to me, she had also been eyeing me, so she asked me to bring my phone, and she dialed her number on it. We all know the rest of the story, and now, we have two kids between us. I feel it was God that wrote our script, and I am pleased with it.”