Addressing journalists after Tuesday's plenary in an emotion laden voice, Melaye said it was imperative for him to clear himself of the scandal as a Senator of the Federal Republic of Nigeria.

Disclosing that he was pursuing his 8th masters degree in crime prevention at the Ahmadu Bello University, Zaria where he got his first degree years ago, he added that his name was being smeared by those against his rising political profile. 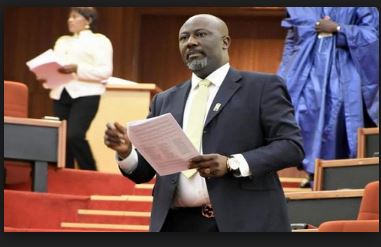 He explained that, ”over time, when the online newspaper lacks patronage, they stir up issues against me to attract traffic, unfortunately, there is no monetary compensation between us,” he said.

He was optimistic that the Senate Committee on Ethics and Privileges will eventually clear him of the allegations, insisting that nobody is above the law.
M

He is not.. He has Harvard as well
L

RemmyAlex said:
He is not.. He has Harvard as well
Click to expand...

Did he run them all concurrently?
M

RemmyAlex said:
He is not.. He has Harvard as well
Click to expand...

He spent only a week thee for a seminar
P

Samguine said:
He spent only a week thee for a seminar
Click to expand...

A day is education... Not necessarily 9 years
M

RemmyAlex said:
A day is education... Not necessarily 9 years
Click to expand...

That does not make him an alumnus of Harvard though
P

Samguine said:
That does not make him an alumnus of Harvard though
Click to expand...

I think it is... Even if the programme is a DAY since it is Harvard learning.
I

He cannot say 8th masters degree amid these allegations if he is not certain..
Interesting story to follow..
A

Dino this scandal will short your big mouth. 8 master degree pls those schools.

Sent from my Infinix-X551 using Nigerian Bulletin mobile app
A

RemmyAlex said:
I think it is... Even if the programme is a DAY since it is Harvard learning.
Click to expand...

You must be joking as well as Dino himself....I might believe that of Nigeria but doubt the one from Harvard.

Mar 24, 2017
abujagirl
A
P
Politics CHECK: Did Dino Melaye Graduate Before He Was Born?