Fayemi in a statewide valedictory broadcast said he had kept faith with all his electioneering promises.

In his emotion filled address, the outgoing governor said his final day in office did not come as a surprise as he had always expected it and prepared for it.

He described his four-year tenure as "glorious", saying he used his office to tackle poverty as well as instilled decency in governance.

"As I step away from office, I can say the promises I gave are the promises I kept, I have made Ekiti a much better place than I met it. There is time for everything and a season for every purpose under heaven,earthly things are temporary and infinite.

"Governance is a continuum, administrations come and go, our electorate laws do not allow holding office in perpetuity, ‘’ Fayemi said.

He, however, called on the Ekiti people to shift from "personality orientation of politics to politics of strong institutions and of enlightened policy.

"Public office is too serious to be left to the venal and mean.

"I came into politics because I believed committed leadership can provide people the tools that empower them and give them control over their destinies,’’ he said.

Fayemi, who used the occasion to formally lift the curfew imposed on the state in the wake of recent violence, urged residents to be peaceful and law abiding.

He said he decided to lift the curfew based on the advice by various security agencies that there was now relative peace. 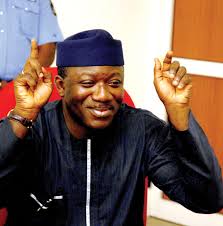