Curators
FREE Nigerian Business Directory
✅ NEW - get your business listed and your information shared across social media.
Ad
Gunmen suspected to be Ijaw youths from Ogbe-Ijoh community in the Warri South West Local Government Area of Delta State, on Saturday evening attacked the patrol team of the Nigeria Immigration Service, injuring one and then collected two riffles belonging to the officers. 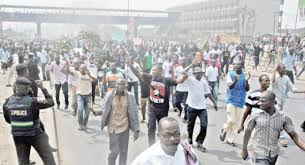 It was learnt that an operative of the Marine Police team who rushed to the scene to rescue the officers also sustained a gunshot injury in his hand during the attack which lasted for over 30 minutes at about 6:40pm on Saturday.

The NIS operatives were attacked by the gunmen who chanted in the Ijaw language war songs along the creeks of Fegenegbene community, opposite Ogbe-Ijoh while heading towards the Warri Main Market.

A source attached to the Marine Police Post in Warri said, “If not for the swift intervention of the police, three operatives of the Nigeria Immigration Service and a civilian speedboat pilot would have been abducted by the heavily armed men numbering about ten.

It was learnt that the attack was not unconnected with the recent rivalry over the disputed land boundary between Aladja community in Udu Council and Ogbe-Ijoh community in Warri South West Council areas of the state.

Mar 22, 2017
kemi
K
A
Metro Ijaw Youth Council - How We'll React If Any Southerner Is Killed In the North