FREE Nigerian Business Directory
✅ NEW - get your business listed and your information shared across social media.
Ad
Vice President, Yemi Osinbajo-led committee set up to investigate the suspended Director General of the National Intelligence Agency, Ambassador Ayo Oke, and the suspended Secretary to the Government of the Federation, Babachir Lawal, has shelved plans to invite former President Goodluck Jonathan for political reasons.

An impeccable source within the Federal Government told PUNCH that Jonathan would not be invited. 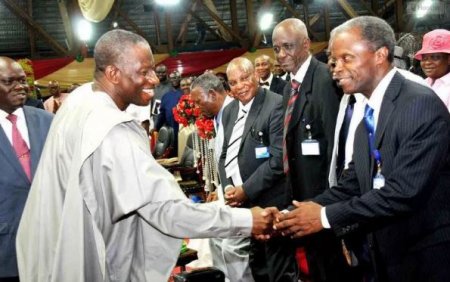 The source, who wished to remain anonymous because of the sensitivity of the case, said this was not the first time that Jonathan’s name had featured in a probe.

He explained that he was deliberately being left out for political reasons.

The source said, “We have carried out several probes, including the $2.1bn arms scam involving the (former) service chiefs and the former NSA, Col. Sambo Dasuki; we have probed the $1.3bn Malabu scam involving the former AGF, Mohammed Adoke (SAN), as well as dozens of other investigations.

“In all of these, the persons involved have all claimed to have received approval from Jonathan. But inviting or prosecuting a former President has a lot of implications.”

I think the idea of not inviting former President Goodluck Jonathan is sweep the matter under carpet and cover up the investigation.
B

They sud do all needful in respectful of position

Hmmm issue of shelving the invitation for questioning of former president will not help the matter. Let him come and have his own say about it. This issue of people's assets not just govt assets

They have seen the truth, and they want to cover it up. Oh God please have mercy upon us

When then during Goodluck Jonathan presidency, the foreign press had accused him of supervising the looting of Nigerian treasury, the then thought was that it is a semantic of his innocence but it now turns to be pragmatic.

We are in Nigeria sha.
E

Anything can happen
V

He deserve it
S

I think GEJ should be call for questioning..

Curators
The story makes no sense at all. It is time to act and leave the talk. Can we start seeing all these people behind bars. We have done media trials for 2 years, in that time we should have gathered all the evidence required, instead we move from one story to another.
A

A
Politics Goodluck Jonathan, Others To Be Questioned By Osinbajo Over Money Discovered In Ikoyi