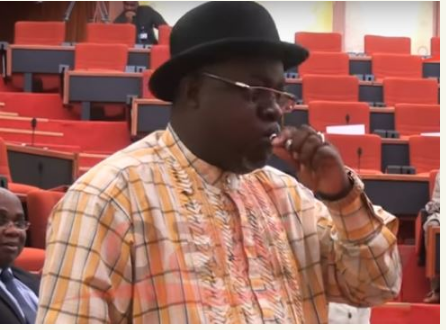 It was learnt that the federal lawmaker got up at about 11.07 a.m to protest the refusal of the Federal Government to return the recovered $49 million at an Ikoyi apartment in Lagos to the Rivers State Government, brought out a whistle.

Before the presiding officer, Sen. Ike Ekweremadu could stop him, Sekibo blew the whistle three times while calling on the Senate to investigate the issue.

Curators
Some important points blow away by buffoonery
P

Just wait a second and see the foolish people that are making our laws.

The Senate should withdraw the capacity of the Vice President as head of the Investigative panel... Mtcheww. Who chaired their own investigation panel that revealed that Rivers state truly owns the cash? Where are the reports from the investigation? Well, I have always known Rivers state to be a joke.
P

Can we go back to a Stateless Nation as postulated by Thomas Hobbes @kemi come in here.