Curators
The Kwara State House of Assembly has called on the state government to immortalise the 1994 African Footballer of the Year award winner, Rashidi Yekini, to acknowledge his enormous contributions to football development in Nigeria. 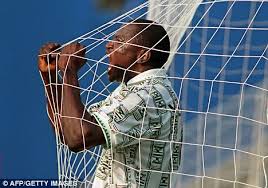 This followed a matter of general public importance raised by the House Leader, Hon. Hassan Oyeleke at the sitting of the House yesterday, on the fourth anniversary of the demise of the soccer legend.

Other members, who spoke on the sterling qualities of Yekini, noted that the gangling striker had projected the image of the country positively to the outside world through the round leather game during his lifetime.

Recently, there was an online report on the mother of late football legend who now sells bread to survive and called on the government to come to her aid and that of other members of the family Yekini left behind.