For Sale - One Bedroom Executive Flat - Lagos (NGN37m)
✅ NEW - car park, swimming pool, 24 hours light/security and more.
Ad
Nigeria- The 40 tank wagons imported between 2012 and 2013 by the Nigeria Railway Corporation (NRC) for the haulage of petroleum products from the Apapa Ports to other locations are rotting away at the railway yards in Apapa and Ebute-metta, The Nation reports.

The corporation, as part of strategic upgrading of its services, took delivery of the tank wagons in 2012 and 2013.The first 20 came in 2012. The last 20 were delivered last year. Each has an inbuilt capacity of 100,000 litres of petroleum products. The 40 wagons could haul four million litres of petroleum. They cost billions.

The wagons are expected to relieve the roads of heavy trucks that weaken them and decongest the ports and Apapa roads of petroleum tankers. Each tanker’s maximum capacity is 33,000 litres.

The wagons, it was discovered, has not been functioning because most of the tank farms around Apapa are not accessible. Many of the oil marketing companies were said to have flouted the planning regulations while constructing their tank farms by failing to build rail access into their facility. 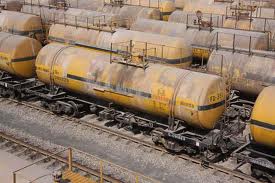