About 20 persons was said to have escaped death in Aba, Abia State, yesterday, when the brake of a fuel tanker failed and it crashed into two cars before ramming into a trailer as all the vehicles moved in the same direction. 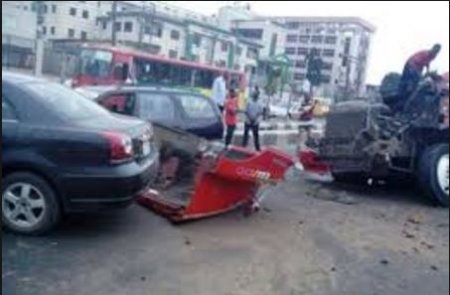 Eyewitnesses account said that the driver of the trailer skillfully used his truck to prevent the fuel tanker from running across the Aba water side bridge where scores of passengers were boarding vehicles to different parts of the city centre.

“If not for what the trailer driver did, if the fuel tanker had crossed the bridge, dead bodies could have littered the place because many passengers were there trying to board vehicles to the city centre.

It was something to give God the glory that with all that happened, no soul was lost”, they said.
PLACE YOUR ADVERT HERE
Connect with people interested in education, social, crime and health News!