Curators
FREE Nigerian Business Directory
✅ NEW - get your business listed and your information shared across social media.
Ad
The leader of the Indigenous People of Biafra, Mr. Nnamdi Kanu, has been released from the Kuje Prison in Abuja after meeting the bail conditions granted him by a Federal High Court in Abuja on Tuesday, says his lawyer, Mr. Ifeanyi Ejiofor. 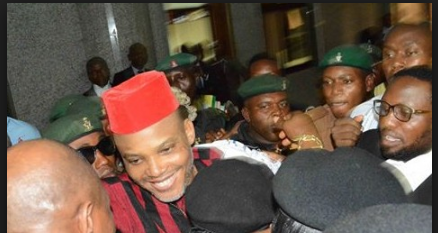 Ejiofor said his client met all outstanding conditions on Friday and was released shortly after all necessary documents were signed by the trial judge.

“Nnamdi Kanu left the prison at about 5pm after meeting the bail conditions,” Ejiofor told Punch.

Justice Nyako had on Tuesday granted bail to Kanu, who along with three others are being prosecuted on charges bordering on treasonable charges.

The had said she decided to release Kanu from custody on health grounds.

The judge however barred the IPOB leader from granting press interview while on bail.

The judge also gave a stern warning to the defendant not to participate in any rally or be found in a crowd of more than 10 persons in the course of the bail.