FREE Nigerian Business Directory
✅ NEW - get your business listed and your information shared across social media.
Ad
Miss Iraq 2015, Shaymaa Qasim has been warned by terrorist group ISIS in a spine chilling phone call that she will be abducted unless she joins them. According to the Jerusalem Post and Kuwaiti daily al-Watan, Student Shaymaa, who is Iraqi's first beauty queen since 1972 was told to join the caliphate or face being kidnapped. But Shaymaa says she's not scared of the threat.

The beauty queen speaking to NBC News said she was determined to show her confidence because she wasn't doing anything wrong.

'I want to prove that the Iraqi woman has her own existence in society, she has her rights like men. I am afraid of nothing, because I am confident that what I am doing is not wrong.' 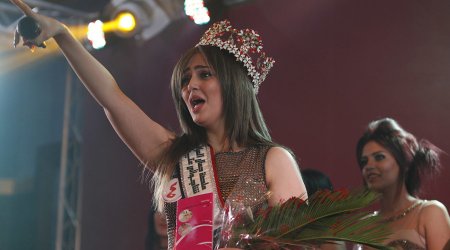 Qassim is set to represent Iraq in the Miss Universe contest to be held in Thailand in March 2016. The competition finale was held in a Baghdad hotel and featured eight contestants in evening dresses. It was the only part of the competition opened to media.

According to Reuters, at least two young women had pulled out of the contest after receiving death threats. And organisers dropped the swimsuit section of the competition and postponed the televised finale in an attempt to deflect some of the criticism from religious hardliners and conservative tribal leaders who said such pageants are un-Islamic and threatened public morality.

The first and last time Iraq participated in a major international beauty pageant was in 1972 when Wijdan Burhan al-Deen represented the country at the Miss Universe contest.
You must log in or register to reply here.

J
Entertainment Chioma Obiadi: Why Miss Nigeria Doesn't Want To Be In A Relationship