Curators
FREE Nigerian Business Directory
✅ NEW - get your business listed and your information shared across social media.
Ad
Arsenal claimed a surprise friendly win against Bayern Munich as Alex Iwobi and substitute goalkeeper Emiliano Martinez led them to a penalty shootout win after a 1-1 draw in normal time. 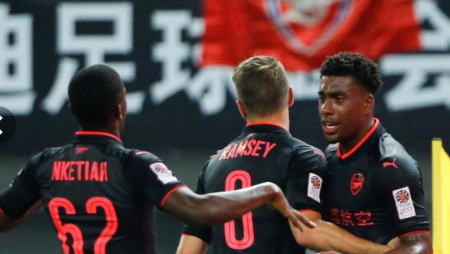 Arsene Wenger’s men had looked off the pace throughout a first half in which Petr Cech kept them alive, with only an early spot kick from Robert Lewandowski giving Bayern the lead.

The German champions were made to pay for their profligacy in the closing minutes as Arsenal mounted a rare counter from which Iwobi secured them a surprise equaliser against a side that had hammered them 5-1 in each of their last three meetings.

Martinez saved two penalties in the shootout to secure victory for the Gunners.

Club captain Per Mertesacker had pulled out moments before kick-off with illness and it seemed he was not the only one struggling, with Sead Kolasinac substituted before the interval for what seemed to be the same reason.

The match ended 3-2 on penalties.