For Sale - One Bedroom Executive Flat - Lagos (NGN37m)
✅ NEW - car park, swimming pool, 24 hours light/security and more.
Ad
Bello Haliru Mohammed who was recently assigned to the position of campaign director by President Goodluck Jonathan was allegedly indicted by a German court in 2007 for collecting bribe.

President Goodluck Jonathan’s choice for reelection campaign director, Bello Haliru Mohammed, a former minister and once an acting head of the ruling Peoples Democratic Party, is a confirmed bribe taker, indicted by a German court in 2007, PREMIUM TIMES can report today.

Messrs. Buhari and Atiku are vying for the presidential ticket of the opposition All Progressives Congress, APC. The presidency has said Mr. Jonathan will pick his nomination form shortly and will formally declare a long-expected candidacy for the 2015 election, at a grand event early November.

That event will be overseen by an expansive Presidential Declaration Committee led by Mr. Mohammed, supported by a former senate president, Ken Nnamani, the Secretary to the Government of the Federation, Anyim Pius, and the president’s political adviser, Rufa’i Alkali. Dozens of others drawn from the PDP, the National Assembly, the Executive Council of the Federation, and the PDP Governors’ Forum, are also members of the team. 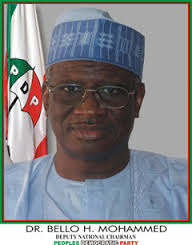