Politics Jonathan Has Not Failed The North - Kashamu

Kashamu says such allegations are 'most unfortunate.' According to him, Nigerians, at this time, should rally round the current administration in an all-hands-on-deck approach to ending the insurgency in the North.

From The Sun:
In a statement issued yesterday in Lagos, Kashamu said: “I note with dismay the attempt by the ACF to heap the blame of the security challenges bedevilling the North-East on President Jonathan as if they were his creations. Terrorism is a global phenomenon and requires broad-based cooperation. It is unfair that whereas the rest of the world is collaborating with the Federal Government to arrest the situation, some of our otherwise respectable citizens are promoting disunity among our people. We should take a cue from other climes where the citizens support those in government once the elections are over.”

He said it was important for all patriotic Nigerians to support the present administration to achieve its Transformation Agenda, adding that it was by so doing that the nation’s development could be steady and sustained. 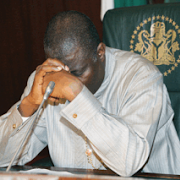 M
Politics Nigerians Should Be Angry At Jonathan The Thief, Not Buhari - Segun Oni