Politics 'Jonathan Is Not Our Brother' -Amaechi Tells Rivers People

For Sale - One Bedroom Executive Flat - Lagos (NGN37m)
✅ NEW - car park, swimming pool, 24 hours light/security and more.
Ad
Governor Rotimi Amaechi of Rivers state on Saturday said that President Goodluck Jonathan should not be described as his brother because the President has not done things to deserve the brother tag.

According to PUNCH, speaking at the All Progressives Congress (APC) solidarity rally held at the Adokie Amiesimaka Stadium in Ikwerre Local Government Area of Rivers State to mark his seventh anniversary in office, Amaechi said, "When Yar’Adua was alive, Niger Delta Ministry was working. Now, it is only one item; East-West Road and they say he (President Jonathan) is our brother. He is not my brother; my brother is the man who delivers on his services for me. If the President says he is our brother, let him mention one project he has done for us.

"APC is the solution to the protection of our interest. We must go there to vote out the PDP. It is not about our son. They tell you that you should not vote for these people because they are Hausa People; they are Muslims. But the refinery in Rivers was built and commissioned by Tafawa Balewa; he was a northerner. Shagari started NAFCON, IBB commissioned; IBB started the Eleme Petrochemical, Abacha completed it.

"They are all northerners; they are all Muslims. NLNG was started and completed by Abacha and he was a northerner and a Muslim. Bonny NLNG, NDDC, Niger Delta Ministry were established by northerners". 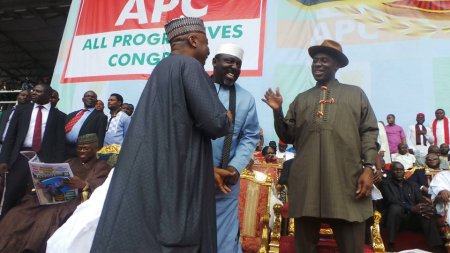 nigerians dnt list to a fool amechi bcos jonathan did'nt allow him to rot money from niger-delta like odiri and obasajun or he did little bit with former president yar'adua northerners did all this bcos they does have chiocs! thats where nigerian gort get their 80% of conomic come from dailybcos amechi and co dnt kwn their are saying ....amechi no vote for and ur northerners mates...fuck all of you all......jonathan our man God bless ninja
A

Politics APC Crisis: Amaechi Says He’s Not Sure Magnus Abe Is Still In The Party – The Trent Newspaper

J
Politics 2019 Elections: We will not Impose Any Candidate - Amaechi