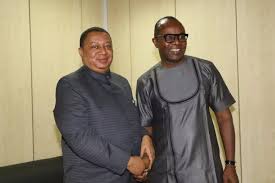 Kachikwu made the disclosure while receiving the OPEC Sec Gen Barkindo. He said when the campaign for the job was heating up, he met with a prince of Saudi Arabia, who is the country’s petroleum minister, to convince him to support Barkindo for the position as he possessed the necessary qualities.

Kachikwu said: “I met with the prince, and I told him I have a candidate who has seven qualities that an OPEC SG must possess. He asked me to list them, and I said: ‘1, Barkindo has the intellectual insanity to work there’. At that time, OPEC was in a rough rumble that only a mad man will take the job. I also said he is humble and that he is a master statistician.”
PLACE YOUR ADVERT HERE
Connect with Politics News Readers!