FREE Nigerian Business Directory
✅ NEW - get your business listed and your information shared across social media.
Ad
The leadership of the All Progressives Congress (APC) has brokered a peace deal between the governor of Kano state, Dr. Umar Abdullahi Ganduje, and his predecessor, Senator Rabiu Musa Kwankwaso, after securing their commitment to work together in the interest of the people.

APC Deputy National Chairman, Senator Lawan Shuaibu while addressing a peace meeting on Friday comprising influential party stakeholders from Kano state said tremendous progress has been made and that both Ganduje and Kwankwaso have accepted to work together again. 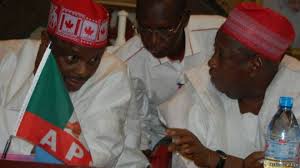 “From the conclusion of Today’s interaction with both the Governor, Ganduje and the former Governor, Senator Kwankwaso, they both agreed to work together in the interest of the people and their party and put behind whatever differences that might have opened the window for discord and I can assure that for the party in Kano, we have better days

Source: ThisDay
You must log in or register to reply here.