For Sale - One Bedroom Executive Flat - Lagos (NGN37m)
✅ NEW - car park, swimming pool, 24 hours light/security and more.
Ad
According to a report on Vanguard Sports,Super Eagles interim coach Stephen Keshi has been discreetly lobbying underground to keep his job as the manager of the national team.

Keshi is yet to be offered a new deal by the Nigeria Football Federation(NFF) and with new executives being elected into the Glass House,the 52-year old could be on his way out.

President of the NFF,Amaju Pinnick is not a known fan of Keshi,with fears that he could fire him after the 2015 Nations Cup qualifiers against Sudan.

Already,Samson Siasia has been bandied as a possible replacement,and a German tactician touted,but Keshi is believed to be eager to retain his job.

Earlier this week,Keshi was quoted to have said that coaching the Super Eagles is not: "a do or die affair", however it has emerged that he really wants to continue coaching Nigeria.

“He has been calling the new Executive Committee of the NFF and begging them that they should not overlook him as he was prepared to serve Nigeria. He also said that his commitment to serve Nigeria was evident in his decision to work on interim basis without contract”,an official of the NFF told Vanguard.

“Since we are in the middle of a qualifying campaign for the 2015 Africa Cup of Nations in Morocco, which they don’t want to rock, members of the board are thinking of giving Keshi a short-term contract, maybe for six months, to enable them asssess him and think of the way forward for Nigerian football because the interest of our football is paramount in what we we are doing”. 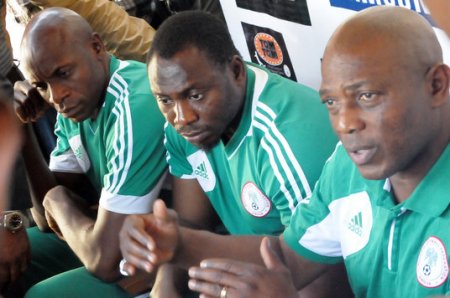