Sixty-year-old Highsent Nwogu has been arrested for producing fake dollars worth N3m and defrauding residents of Ogba in Lagos state.

Nwogu has five children and three grandchildren. He hails from the Umuahia-South Local Government Area of Abia State.

His mode of operation is to ask his victims to buy some goods from overseas, and thereafter offer to get dollars for them to pay for the goods. He'd then supply fake dollars to them and receive original naira notes.

He uses a rented apartment on Abimbola Street, College Road, Ogba, for the illegal production of the dollars. 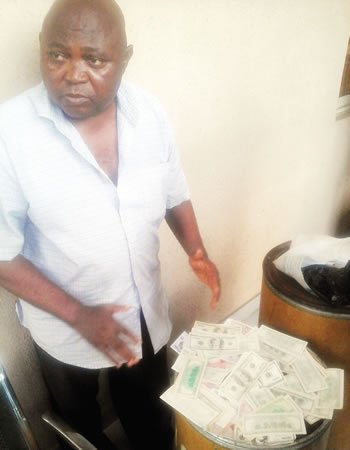 One of his victims, Hellen Olajide, who was defrauded of about N1.95m, reported the matter at the Area G Command, Ogba, and he was thereafter arrested.

Fake dollars worth N3m, chemicals and water drums were recovered from his apartment.

Speaker afterwards, Nwogu said he ventured into the con to make ends meet.

"I started currency production about four years ago. I have been arrested by the police on two occasions. This is the third time. I learnt how to produce the money in the Iyana Ipaja area.

“It was in August that I met Hellen (Olajide). When she found out that I had defrauded her of over N1m, she threatened to call the police, but I assured her that I would refund the money. She later called the police to arrest me.

“I want the government to forgive me. I collected N10,000 from my first victim, N30,000 from my second victim and N50,000 from another. I have three persons working with me; I used the money to solve my family problems.”