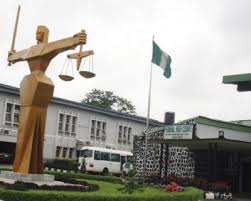 The prosecutor, Inspector Andohemba Koti, disclosed this on Friday when the News Agency of Nigeria (NAN) sought an update on the case.

Koti said the lawyer’s continued detention was as a result of his inability to meet the bail conditions of N100,000 with two sureties in like sum given by the Magistrate, Mr L.A. Owolabi, at the last hearing of the case.

Uzoamaka was arraigned on a four-count charge bordering on unlawful penetration into the private part of the minor.

The victim, who was living with her parents in the United Kingdom, had visited Nigeria while on vacation.

Before his last arraignment, he had initially appeared at the court on August 12 on a three-count charge bordering on defilement which he allegedly committed in one of the court rooms at the magistrates' court.

The minor had followed her grandmother, who was a claimant in a civil case, to the court on August 11 when the incident happened.

It was gathered that the lawyer, who the woman wanted to engage to handle the case, was initially playing with the victim before he allegedly lured her into the vacant courtroom, where he reportedly carried out the act.

The girl was said to have rushed out from the room in tears and told her grandmother that the lawyer fondled her breasts and fingered her private parts.

"The lawyer is still being remanded in prison because he could not meet his bail conditions. That is all I can tell you for now. We are on top of the matter and we are awaiting the DPP’s advice on it," he said.