They received a letter last week reportedly written by armed robbers. Apparently, the robbers wrote the, letter printed it on A4 papers and scattered it on the streets, which was discovered on Thursday morning last week.

About 20 copies of the letter were said to have been picked up from streets such as Lateef Bello, Ogunbewon, Taiwo Adediran, and Alhaji Hamzat.

Our correspondent learnt that the people called the attention of landlords to the document, and the landlords association was said to have reported at the Igando Police Division.

During a visit to the area on Friday afternoon, PUNCH Metro obtained a copy of the letter.

In the paper, the robbers wrote that residents should be prepared to ‘entertain’ them as they were coming for their end-of-the-year packages. The robbers added that they could strike the area at any time they deemed fit. 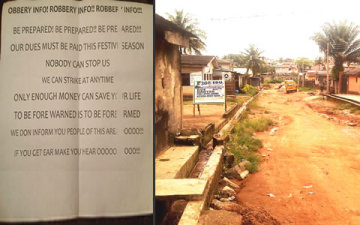