FREE Nigerian Business Directory
✅ NEW - get your business listed and your information shared across social media.
Ad
Lagos State Government has taken into custody Precious Chinwedu, a nine-year-old housemaid, who was tortured by her boss for allegedly stealing crayfish

The Office of the Public Defender had moved the primary three pupil, who hails from Orlu, Imo State, from Rem-Yems Hospital in the Agbado area of Lagos, where she had been on admission since December 28, 2015, PUNCH learnt.

It was reported that Chinwedu’s boss, Ifeoma Mbakwe, had last December sent her to bring the crayfish in the kitchen but she could not find it. The woman, however, accused her of eating the crayfish without her consent.

She reportedly beat up the girl before pouring hot water and forced her to sleep in pains on that day before taking her to the hospital the following morning.

Chinwedu said, “She (Mbakwe) said I should go and bring crayfish, but I told her I did not see it. She said I ate it. She used something we used to grind pepper to hit my head. She bit me in the back and poured hot water on me. I complained that my body was paining me. But she told me to go and sleep like that. 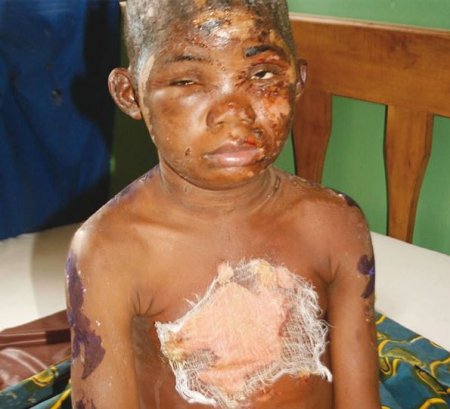 “She does not give me food regularly. There is no food for me in the afternoon when I come back from the school. Sometimes, she would not give me food in the evening. She always beats me. I want to go back to my parents.”

The Director OPD, Mrs. Omotola Rotimi told PUNCH that Governor Akinwumi Ambode and the state Attorney General, instructed the agency to cater to the girl.

She said, “The attention of the governor and the Attorney General was drawn to the plight of Precious Chinwedu, whose boss poured hot water on. We were instructed to take over the matter and the girl has been taken from the hospital with the help of the police. She is now in our protective custody.”

Pls lagos i need to see that baren and wicked stupid and witchcraft so called mbakwe God don save you as the poor girl is not from my village I would have used you for suya meat could any body get me the phone number of that witchcraft woman pls.
P

C_oza said:
Pls lagos i need to see that baren and wicked stupid and witchcraft so called mbakwe God don save you as the poor girl is not from my village I would have used you for suya meat could any body get me the phone number of that witchcraft woman pls.
Click to expand...

you have to visit OPD office Sir
I

OMG this is wickness and inhuman. This always bother me a lot if you knw u cant cater 4 d needs of sm1 child why on earth will you accept her/him as ur house maid. Parents should b kiaful whom dey give their children to as house help
You must log in or register to reply here.

L
Metro The Story of Ifechukwu, a 16-year-old Girl Who Had Sex With 52 Men in One Night

A
Metro 45-year-old man Accused of Raping,Impregnating 13-year-old in Lagos - She's My Fiancee