The Lagos State Government on Sunday said it was finalising arrangements to deploy some health workers who had helped in the containment of the Ebola Virus Disease (EVD) in the state to Sierra Leone .
The Governor, Babatunde Fashola, made the announcement in Ikeja while speaking at a programme to commemorate the 2,700 Days of his administration in office.

The governor said the health workers were to replicate the state`s virus containment strategies in the Sierra-leone with a view to assisting the Ebola-hit country overcome the health crisis.

Fashola said although Nigeria was, as of now, free from the disease, there was still the risk of new infections from cross-border movements.

He, therefore, said the state`s planned mission to Sierra Leone was not only to assist the country to overcome the great health challenge, but also reduce the risk of the disease to countries within the sub-region.

The News Agency of Nigeria(NAN) reports that Sierra Leone accounts for a substantial number of the over 4,000 global Ebola deaths.

'That is why I appeal to the Federal Government to continue to scrutinise people travelling into Nigeria from land,sea and air from regions where the problem is still ravaging.

``That is why some of the things the commissioner for health will be announcing very soon is the arrangements we are making to send some of our health workers and volunteers to go and help out in Sierra Leone.

"That is the only way we ,the whole of Africa and the World can be safe."

Fashola said the state government had taken a number of initiatives to prevent a return of Ebola in the state.

Some of the strategies, according to him, include the deployment of screening equipment to schools and hospitalsand the constructon of sanitary facilities in schools.

Others are training and retraining of personnel on infectious diseases diagnosis and the sensitisation of residents on how to be safe from the problem. 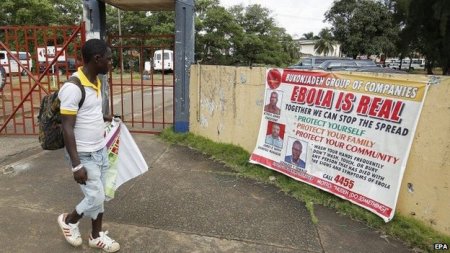