Curators
FREE Nigerian Business Directory
✅ NEW - get your business listed and your information shared across social media.
Ad
The police on Tuesday brought before a Lagos State Magistrate’s Court in Ikeja a 51-year-old landlord, Ishola Idris, and his 35-year-old tenant, Linus Okonkwo, for allegedly defiling a 13-year-old housemaid.

The housemaid was said to be living with her guardian on Celestial Road, Igando, Lagos, where the incident happened. Both Idris and Okonkwo were arraigned on two counts bordering on child defilement and sexual assault, which they pleaded not guilty to.

The landlord allegedly deflowered the girl, ‘sodomised’ her and turned her to a intimacy gadget. He also allegedly threatened to kill the girl if she ever told anybody. It was learnt that the minor confessed under pressure when blood was spotted in her anus.

The two counts preferred against the defendants read, “That you, Ishola Idris, sometime in January 2017, on Celestial Road, Igando, Lagos, in the Lagos Magisterial District, did unlawfully defile one 13-year-old child (name withheld) by having sexual intercourse with her.

That you, Linux Okonkwo, sometime in March 2017, on Celestial Road, Igando, Lagos, in the Lagos Magisterial District, did unlawfully sexually assault one 13-year -old by penetrating into her private parts.”

The alleged crime, according to the police, is punishable under Section 261 of the Criminal Law of Lagos State, 2015. The Magistrate, Bolanle Osunsanmi, granted each of them bail in the sum of N500,000 with two sureties each in like sum. The matter was adjourned till October 12, 2017 for trial. 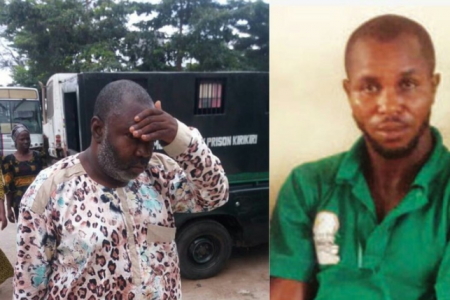