Curators
FREE Nigerian Business Directory
✅ NEW - get your business listed and your information shared across social media.
Ad
Former Governor of Ekiti State and Minister of Mines and Steel Development, Dr. Kayode Fayemi on Tuesday instituted a libel suit against a member of Ekiti House of Assembly, Dr Samuel Omotoso; and Special Assistant on New Media and Public Communications to Governor Ayodele Fayose, Mr Lere Olayinka, over offensive statements made against him. 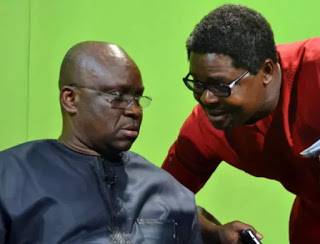 The Minister, who is claiming N3 billion as damages in the libel suit instituted against Governor Fayose’s aides, said the action became necessary following the failure of the defendants to retract the libellous statements and tender public apology as demanded by his counsel, Rafiu Oyeyemi Balogun, in a letter dated November 19, 2016
You must log in or register to reply here.