For Sale - One Bedroom Executive Flat - Lagos (NGN37m)
✅ NEW - car park, swimming pool, 24 hours light/security and more.
Ad
The appointment of Sunday Oliseh as Super Eagles Head Coach in July 2015 split opinions from Nigerians far and wide, some questioned his experience as a coach despite his UEFA Pro License; while others were worried about his temper.

According to PUNCH, here are the top controversial decisions of his short reign as Super Eagles boss:

1. Leaving Ighalo, Mikel and Moses out

Oliseh’s first task was to assemble a team for Nigeria’s 2017 Africa Cup of Nations qualifier away to Tanzania. The Eagles had struggled to beat Chad 2-0 at home in their first match of the series — under Stephen Keshi – and expectations were high ahead of the Dar es Salam clash.

Three months after his appointment, Oliseh stripped Nigeria’s most capped footballer, Vincent Enyeama, of his captaincy after a dispute with the goalkeeper. He replaced Enyeama with CSKA Moscow forward, Ahmed Musa, who has flattered to deceive. The drama that followed led to Enyeama unceremoniously retiring from the national team.

After the Super Eagles beat Cameroon 3-0 in a friendly on October 11, Emmanuel Emenike retired from the team in controversial circumstances, alleging that he was threatened.

The West Ham forward wrote on Instagram, “After five great years, I am happy to announce that I have put a full-stop to my national team career for the sake of national peace. 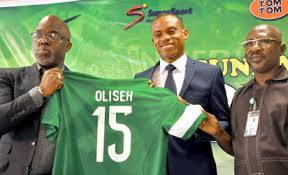 In the match against Tanzania, Oliseh substituted Lukman Haruna after 15 minutes in the first half. The coach cited the player’s disobedience as a reason for the change.

5. Blaming the NFF for CHAN failure

After the Eagles crashed out of the African Nations Championship, Oliseh blamed the Nigeria Football Federation for the shocking exit.

Before the NFF was done getting the coach to clarify the comments he made about the Eagles collapse at the CHAN, Oliseh posted a video on Youtube.

It was a response to his critics; it was months of pent-up frustration set free. The critics were insane. Yes, insanity has befallen them, according to him.