The Senate President, Bukola Saraki had in Morocco denied that the acting chairman of the Economic and Financial Crimes Commission (EFCC), Ibrahim Magu was rejected by the upper house of legislature because of a security report issued by the Department of State Services (DSS) which questioned Magu’s integrity.

He, however did not state the main reason for the rejection, only that Mr. Magu did not pass the senate screening.

Majority of the cases have been on going even before the administration of Magu-led EFCC team.

Senate President, Bukola Saraki (APC, Kwara central). Saraki is a two-term governor of Kwara State (2003 to 2011) and a 2-term senator.

He is facing several count charge at the Code of Conduct Tribunal (CCT) bordering on false assets declaration while he was the governor of his home state and his spouse, Mrs. Toyin Saraki has a file at the EFCC over alleged squandering of Kwara State funds.

Senator Ike Ekweremadu (PDP, Enugu West) is the Deputy Senate President. Ekweremadu, who has been at the Senate since the era of Senator David Mark in 2007, is facing a forgery case at the Federal High Court.

His colleagues, namely Senator Abu Ibrahim, Kabiru Marafa, Robert Boroffice, Gbenga Ashafa and Suleiman Hunkuyi, dragged him and others to the court over alleged forgery of the Senate standing orders, the document used for the conduct of the Senate elections.

Shortly after the inauguration of the 8th Assembly, he was grilled alongside the Clerk to the National Assembly, Salisu Maikasau and others by operatives of the Nigerian Police over the forgery case.

In January 2016, he was docked on a 19-count charge of corruption by the Independent Corrupt Practices and Other Related Offences Commission (ICPC) at the Zamfara State High Court in Gusau.

The commission accused him of diverting part of the N1 billion project funds for the repair of collapsed Gusau Dam and resettlement of the victims of flood to other purposes.

The alleged offences were committed in 2006 and mainly in October and November of that year, according to ICPC.

Danjuma Goje was the governor of Gombe State from 2003 to 2011. He is presently representing Gombe Central Senatorial District.

The senator, along with four others, is facing an 18- count charge bordering on conspiracy and fraud to N25bn instituted by the EFCC.

The case was transferred to Jos from Gombe in 2015 on the instruction of the Chief Justice of the Federation over security concerns. Hearing in the case was adjourned to April 12 this year.

Alhaji Abdullahi Adamu was the governor of Nasarawa State from 1999 to 2007. He represents Nasarawa West Senatorial District.

In Feb 2010, the EFCC arrested the lawmaker for allegedly misappropriating N15billion alongside 18 others.

He was subsequently arraigned on a 149-count charge of fraud to the tune of N15 billion, before Justice Ibrahim Buba, who was later replaced on the case by Justice Marcel Awokulehin.

The court, however, ruled against the accused persons and ordered them to face trial. The lawmaker and his co-accused subsequently appealed the ruling to the Court of Appeal sitting in Markudi, Benue State.

The case is yet to be concluded. 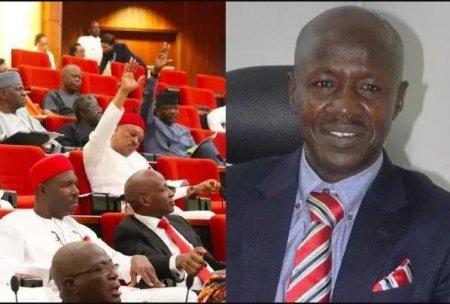 Joshua Chibi Dariye, senator representing Plateau Central. He was the governor of Plateau State from 1999 to 2003 and was re-elected in 2003, before he was impeached in 2006.

Dariye has been standing trial since 2007 on 23-count charge bordering on money laundering, abuse of office and corruption. He was accused of embezzling over N1.2billion ecological funds.

In March 2017, Senator Dariye lost his bid to scuttle his N1.162 billion fraud trial, preferred against him by the Economic and Financial Crimes Commission, EFCC.

Justice Adebukola Banjoko of the Federal Capital Territory, FCT High Court, Gudu, Abuja, threw out his motion seeking for his lordship to be disqualified from the trial.

Akpabio was reportedly invited twice by the EFCC last year, over allegation of N108bn fraud.

Hmmmm, May God help us.