The Police Public Relations Officer of the Borno State Command, Victor Isuku, said the attack occurred at about 9:05pm. 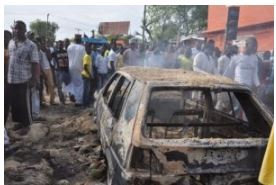 He said, “About 2106hrs of 23/11/2016, an explosion occurred at Muna Garage along Gamboru-Ngala Road, Maiduguri. Two persons including the suicide bomber died on the spot.”

He said a Mercedes Benz car with registration number AX 571 ABJ was also affected by the blast.

Some suicide bombers had recently failed trying to infiltrate the garage which has become an epicentre of bomb blasts.
You must log in or register to reply here.