Alhassan, who was in crutches when she arrived the camp, and after addressing the IDPs, entered the store to discuss with some of the said vulnerable women sequel to an allegation by some foreign non-governmental organisations (NGOs) on violation of some girls and women at the IDPs’ camps in the North-east.

While discussing with the women, she collapsed, but was quickly assisted to a chair and given a bottle of Coke to drink, which revived her. 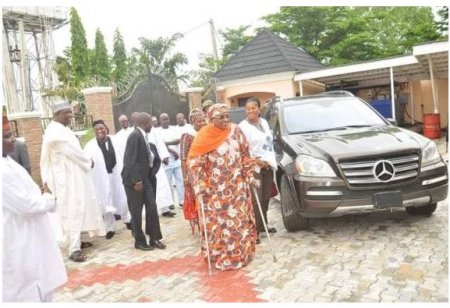 According to some of her aides, she had been diagnosed with low sugar, a problem that creates serious weakness of the body.

But despite her state of health, Thisday Newspaper reported that she managed to explain to journalists at the camp that her fact-finding mission to Yobe, Borno and Adamawa States tend to confirm the foreign NGOs’ allegation.

Alhassan also paid a courtesy visit to the Governor of Adamawa State, Alhaji Muhammadu Bindow, and told him that her visit to the IDPs was to investigate allegations of violation of girls and women and the compound issues of orphans and the vulnerable.

Hajiya Alhassan, returned to the country on July 30th after a successful knee surgery in the United States.
P

RemmyAlex said:
While discussing with the women, she collapsed, but was quickly assisted to a chair and given a bottle of Coke to drink, which revived her.
Click to expand...

Esp.. with the 'Cocaine' therein
P

RemmyAlex said:
Esp.. with the 'Cocaine' therein
Click to expand...