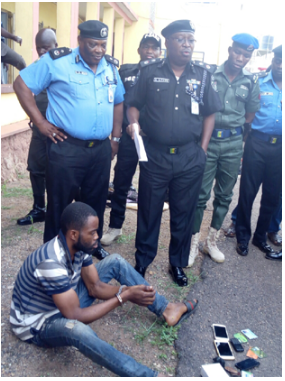 The suspect also reportedly duped his victims of two i-Phones 6 which were later recovered from him. The suspect, who was arrested last week at his residence in Ilese in Ijebu North-East Local Government Area of Ogun State, was accused of impersonating the Ooni on his Facebook and WhatsApp platforms through which he duped his victims.

The commissioner also disclosed that the suspect, who is an indigene of Ondo State, but lives in Ogun State, was taken to the palace of the Ooni, but that the monarch refused to see the suspect. While fielding questions from newsmen, Joseph said he finished from Ilese Comprehensive High School, but could not further his education due to poverty.

He said he learned computer engineering for one year after which he was prompted to engage in Internet scam.

Joseph, who is married with a three-year-old child, explained that he started Internet scam in October 2016, adding that he decided to use the pictures of the Ooni on his Facebook account to perpetrate evils because he was broke and wanted to survive. He said having successfully posed as the Ooni, many ladies fell for him, begging to be his Queens.

This reporter saw nude pictures of ladies sent to Joseph via his WhatsApp. The suspect said one of the victims requested that she needed a N45 million mansion from him, which he said he agreed but on the condition that she would pay N5 million.

He said: “The ladies said Kabiyesi is handsome and would like to be his queens. I asked them to pay money for ritual before they can become his Queens. “Both Aderonke and Williams (victims) live in USA. They sent N350,000 and N250,000 to me through Western Union.”

He said he had no excuse except to apologise to the Ooni and pledged to stop the act once he was let off the hook.

M
Metro Ooni Of Ife Is Married Again, Advises New Wife On How To Maintain Her Status – Nairaland