Politics MASSOB - We Want Biafra Not An Igbo President Of Nigeria

FREE Nigerian Business Directory
✅ NEW - get your business listed and your information shared across social media.
Ad
The Movement for the Actualization of the Sovereign State of Biafra, MASSOB on Thursday said it is not interested in an Igbo Presidency. 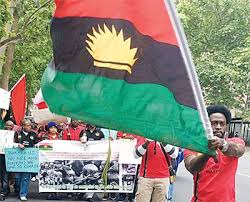 MASSOB’s National Director of Information, Sunday Okereafor, made the remark after National Chairman of the All Progressives Congress (APC), John Odigie-Oyegun called on the people of the South East to vote for the APC, stating that the party would guarantee their quest for an Igbo president; PUNCH reports.

Okereoafor said Igbo were not interested in Nigeria’s presidency. “The claim by the APC national chairman that the party will use Igbo Presidency to finally kill the PDP in the South-East is laughable. Nigeria has never had Igbo presidency in its agenda. So, Igbo man can never be President in Nigeria in 500 years.

“The Igbo elite should understand this. MASSOB does not believe in any political party in Nigeria. We believe in the freedom of Biafra and not the campaign for the Presidency to come to a person from Igbo extraction.”

Can MASSOB pls show us the Biafra Map, including the Ekiti state as pledged by Gov. Fayose.

Oct 19, 2020
Kayode Israel
K
C
Politics For and against the quest for a president of Igbo extraction (1) – Vanguard News