Somehow the knives are not yet out for the Super Eagles team maybe because there is a genuine hope that they can still turn around their fortunes.

It was with forlorn looks and anguish that fans saw Nigeria fall like a pack of cards to visiting Congo last Saturday at the UJ Esuene stadium in Calabar.

Was the loss anticipated,anything to suggest that the Super Eagles would lose to Congo?

Even in all the squabbles and the bickering that engulfed the Nigeria Football Federation(NFF) there was an upbeat feeling that Congo was the least of the country's problems.

While Nigeria laboured and toiled on Saturday,South Africa a day earlier stream-rolled over Sudan in an effortless manner,winning 3-0 away from home in Omdurman.

So the fixture between South Africa and Nigeria is eagerly poised for an entertaining game ,considering that both teams would be approaching the tie with mixed fortunes from their last matches.

While Nigeria knows that it is a must win game for them,the Bafana Bafana will be hoping to overcome their hoodoo over the Super Eagles.

The Super Eagles have an astonishing record against the team from the Rainbow nation,always finding a way to scale through,even when they are in their lowest ebb.

If their is anything South Africa wants to do in this game,it is to stop this cycle of win-less streak against the Super Eagles.

It is so bad that it has become psychological for the South Africans,each time they face Nigeria it is more or less already signed that they will lose the contest.

South Africa coach Ephraim 'Shakes' Mashaba aptly summed it up when he said that Nigeria is their nemesis.

"We are meeting our nemesis but my gut feel is that all that [never beating Nigeria] is about to change. Wednesday should be a defining moment,” the Bafana Bafana coach said.

Although Mashaba did admit that the Super Eagles team is more superior to his team,he however drummed up the prospects of a "war" with the Nigerian coach,Stephen Keshi.

"This Nigeria team has been giving us nightmares, but we will fight in every game,” said Mashaba.

“When two Elephants meet, it is grass that suffers. Watch out, brace yourself for war that day [when Mashaba meets Keshi], because, like I have indicated earlier on, they [Nigeria], have given us sleepless nights.”

“This is one time they must brace themselves for war up to the fullest, it won’t be an easy walk in the park for both teams, but what we are looking for is to come out victorious and that win will change a lot of things in our football, both in administration, media wise, any structure that you talk about,” Mashaba added.

Bidvest Wits midfielder Sibusiso Vilakazi corroborates what Mashaba believes,adding that they will be out to rewrite their history against Nigeria.

“We know our history against Nigeria but we are determined to change all that. History is always there to be rewritten and I am confident that come on Wednesday, we will put smiles on most South Africans faces.”

Interestingly the Nigerians have not been making a lot of noise about this game,maybe because they were humbled by Congo last Saturday.

The off-pitch problems have been sorted now,and there won't be an excuse not to do well in the game.

With so many criticisms trailing the tepid display against Congo,anything other a win for Nigeria will be termed as a failure. 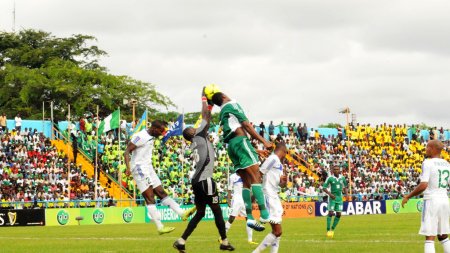