The facility, a major trunk/delivery line that was blown up on Friday night, is being operated by Nigerian Petroleum Development Company in Udu Local Government Area of the state.

The group also warned the oil firm not to embark on any repairs, pending when signals come from them.. 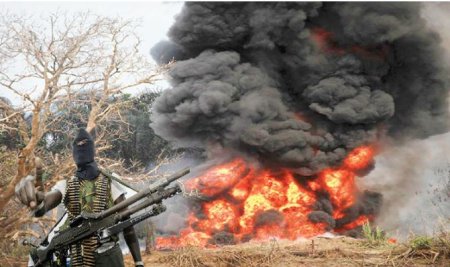 The spokesperson of the group, Gen. Aldo Agbalaja, who claimed responsibility for the bombardment in a press statement tagged “Ours is not a Blind Campaign,” few minutes after the explosion, said, peace cannot be realised in an unjust environment.

“Like we said from the onset, the Niger Delta Greenland Justice Mandate is not just about causing calamity and delighting in chaos, rather a child of circumstance, born to correct an injustice that has brought upon us, from the time of our fathers".
You must log in or register to reply here.

Jan 27, 2018
mrsam
M
A
Metro Niger Delta Militants - All Northerners In NNPC Should Be Sacked, Return Our Oil Wells