France has declared a national state of emergency and tightened borders after following the killing of at least 120 people in a night of gun and bomb attacks in Paris, BBC reports.

The siege ended when security forces stormed the building.

People were shot dead at bars and restaurants at five other sites in Paris. Eight attackers are reported to have been killed. 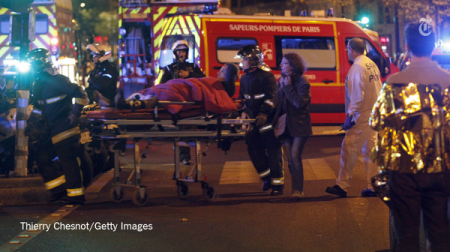 Police believed all of the gunmen were dead but it was unclear if any accomplices were still on the run after the string of near-simultaneous attacks.

Paris residents have been asked to stay indoors and about 1,500 military personnel are being deployed across the city.

The gunmen's motives were not immediately confirmed, but one witness at the Bataclan heard one of the attackers appear to express support for the militant Islamic State (IS) group.

"It's Hollande's fault, he shouldn't have intervened in Syria!" the man shouted, according to French news agency AFP, citing the French president's decision to take part in Western air strikes on IS.