For a chance to win N10,000 in cash in the NB Weekly Quiz, please review the Toyota Camry video and answer the question that follows.

Good luck to everyone!! 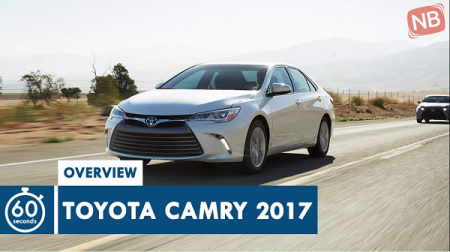 it is Refined ride

the way it is, the Hybrid
manages
great fuel
economy

it offers a stiffer suspension and
some extra styling bits, but its
steering is numb, its braking
and handling unexceptional.

Am skeptical about it. It's comfort ability may lead to road crash

However, I need Toyota Camry with TV

And DSTV decoder. So I can watch my favorite team on play while cruising

Well it's unsafe you may say.

I cannot stop talking about it with my friends

But how much is it?

Is it already in Niger.

At least let look and touch it

I'll buy it when recession subsides

For the majority of people to whom a car is
merely an appliance, the Camry meets their
needs perfectly.
C

Please who can dash me the car
J

Mmmmm. Congratulations to the winner and runner-up. Only God knows when i will be chosen as da winner

the way i see it, the XSE offers a
stiffer suspension and some extra styling bits, but
its steering is numb, its braking and handling
unexceptional.
H

I missed this one
H

Big congratulations to the winners, hope be congratulated too here ooooooo

The game is over. The prize is won. The winner is me. The prize(10k) is paid and it flowed direct into my bank account. Am glad. All thanks to #NigerianBulletin.

I joined the discussions August 2014 and won a prize 2017, after about 3years of consistency. My dreams of winning a prize someday ceased in 2015 but I continued reading/following discussions. Just in April, 2017, a fresh love for #NigerianBulletin reports was kindled. I did read reports with passion because I need to be informed about National matters and issues around me, (of course there is no radio station that broadcasts clearly in my current location). I resurrected the dream of winning again but I reluctantly participated, so, unexpectedly I emerged as the star winner surprisingly. I hereby prophesy that you too will win some good day to come if you persist. Thanks to #NigerianBulletin.
N

Hope to get Lucky here soonest