For Sale - One Bedroom Executive Flat - Lagos (NGN37m)
✅ NEW - car park, swimming pool, 24 hours light/security and more.
Ad
The Movement for the Emancipation of the Niger Delta (MEND) on Monday announced a seven-member team, led by Odein Ajumogobia, a former Minister of Petroleum, to dialogue with the Federal Government.

Jomo Gbomo, MEND’s spokesman, said in an online statement on Monday that other members of the group, tagged, “Aaron Team 2”, are Bismark Rewane (Delta) and Florence Ita-Giwa (Cross River).

Mr. Gbomo said other members of the team would be made public in due course after consultations with relevant stakeholders. 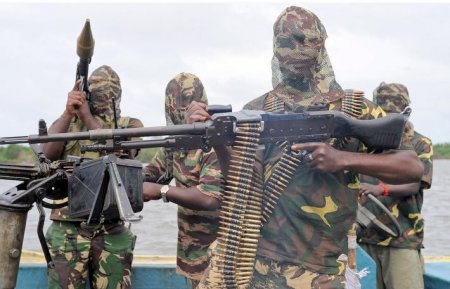 He said the team was made up of patriotic and selfless men and women with good track records and character drawn from different parts of the Niger Delta region.

Mr. Gbomo also said the team would dialogue with the Federal Government on the immediate, medium and long-term future of the Niger Delta region.

He said members had already agreed to serve on behalf of the Niger Delta Region.

He recalled that MEND on May 30, 2014, declared a ceasefire on attacks against the nation`s key economic and strategic interests.

Politics AMNESTY PROGRAMME I will not subject myself to speculative terminal date – Dokubo, Co-ordinator – Vanguard News