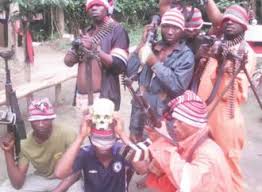 The group, which announced the attack in a Facebook posting, warned Agip personnel to keep away from the pipeline, as anybody found within the vicinity would be beheaded.

The group in the post by one General Don Wannie, claimed it struck because it has nothing to show for the operations of Agip, and other oil companies in their community since the creation of Imo State. “We have seen enough marginalisation and it has to be stopped,” he said.

The militant group said it was forced to resume hostility as a result of the continued criminal neglect of the oil-bearing communities by oil companies.

“We are not happy with Agip because they have continued to neglect our communities. Since they have refused to change, we have equally resumed the attack on their pipelines and we are going to blow until they do the right thing."
You must log in or register to reply here.