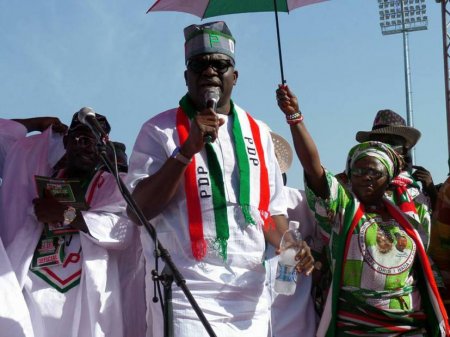 Governor Ishaku will hold a special thanksgiving to mark his Supreme Court victory in honour of Fayose who “predicted” his judicial triumph over his All Progressives Congress (APC) rival, Mrs. Aisha Al-Hassan.

The hint was dropped at a briefing yesterday jointly addressed by Commissioner for Information Lanre Ogunsuyi and Fayose’s Chief Press Secretary Idowu Adelusi.

The projects for inauguration are the Women Development Centre named after the late deputy governor Mrs. Funmilayo Olayinka; 6.2km De-Head-Adetiloye Road executed at N782,021,436; the 800m dualised Awedele-Secretariat road, which gulped N488,199,974 and the Ewi’s Palace gallery on which the government said it spent N212.1million to complete.