FREE Nigerian Business Directory
✅ NEW - get your business listed and your information shared across social media.
Ad
Nigeria has become the largest producer of cassava in the world, Mr Audu Ogbeh, the Minister of Agriculture and Rural Development, has said.

Ogbeh disclosed that Nigeria now produces cassava on a large scale with an annual output of 45 million metric tons.

He said that more than 35 improved varieties of cassava had been developed and registered in Nigeria.

‘‘These varieties had increased the production of cassava to make Nigeria the largest producer of cassava in the world with an annual output of 45 million metric tons,’’ he said. 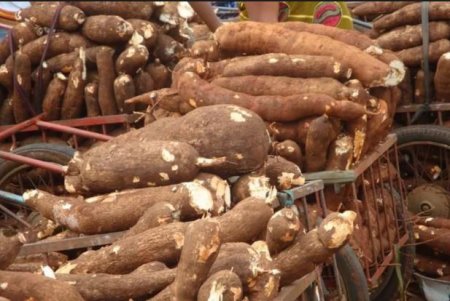 The minister also said that flour mills are being encouraged to substitute at least 10 per cent high quality cassava flour for wheat flour.

He said that Federal Government would sustain its demand for inclusion of high quality cassava flour in bread in the country.
M

I thought Nigerian has always been the highest producer of cassava in the world.

Business Nigerian To Ban Tomato Paste Import Before the end of 2019 – Minister – NaijaBizCom.Com