For Sale - One Bedroom Executive Flat - Lagos (NGN37m)
✅ NEW - car park, swimming pool, 24 hours light/security and more.
Ad
Following the ban on importation of rice in the country, rice smugglers took smuggling to a whole new level- by smuggling in convoys through a thick deep forest, with their own security.

Recently, the Nigerian Customs cracked down on them in an exercise that piqued the interest of several military commanders. Isn't the human brain wonderful?

Days after the Federal Government unfolded a policy to stop rice importation into Nigeria in the next four years, the tempo of rice smuggling in the country has taken a different dimension.

This was evident in the extra-ordinary seizure made, as officers of Oyo/Osun Command of Nigeria Customs Service (NCS) cracked down on smugglers in a convoy of 40 assorted vehicles inside Agbaja forest, off Igbeti axis of Oyo State. The smugglers, fully armed with their own escorts, on sensing the superiority of Customs operatives, abandoned their vehicles along with the items and escaped into the forest.

Though the Command has recorded massive seizures of rice since last year at various operations, the situation surrounding this particular seizure was astonishing and it attracted the attention of top military personnel, Nigeria Police and other security agencies in Oyo State.

The operation was carried out by 3.30am in a thick forest, a terrain where nobody would ever imagine such activity could take place. The forest is over four hours drive from Ibadan. Inside the bush were few houses like ancient pyramid structures. A part of the area has a massive volcanic rock similar to the popular Olumo Rock in Abeokuta. 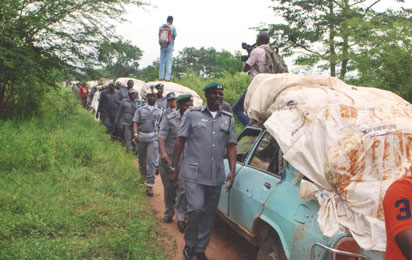