FREE Nigerian Business Directory
✅ NEW - get your business listed and your information shared across social media.
Ad
Petroleum and Natural Gas Senior Staff Association of Nigeria, PENGASSAN, has threatened to shut the nation’s oil sector over alleged anti-labour practices by employers, handing down a seven day ultimatum to government to call the affected employers to order.

The senior staff trade union in a statement on Saturday gave a seven-day ultimatum within which employers should end all anti-labour practices in their companies or risk an industrial action that would totally ground the oil and gas industry.

The union is accusing some organisations in the industry of sacking some of its members without the relevant terms of agreement.

The spokesperson of union, Emmanuel Ojugbana, said despite the tripartite agreement between the Federal Ministry of Labour and Employment, employers, and the two trade unions in the industry – PENGASSAN and the National Union of Petroleum and Natural Gas Workers (NUPENG), some employers still went ahead to sack its members, including some national officers. 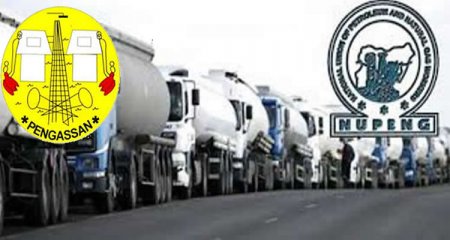 Mr. Ojugbana said despite the agreement that employers should put on hold redundancy in the industry, the managements of some service companies, namely Fugro, Universal Energy, Frontier Services and Petrostuff, went ahead to sack their workers.’

“I want to reiterate our demands that the Federal Government and the concern organisations including H15, IEME Chevron, Universal Energy, Chevron Contracts Tecon and Avion Oil and Fugro should resolve the critical industrial relation issues in their companies, particularly in the recent retrenchment in Fugro and Petrostuff should be reversed.

“Let us stated unequivocally that industrial peace in the oil and gas sector will not be guaranteed if these issues, especially the retrenchment in Fugro, are not resolved within seven days effective Monday, June 20, 2016,” he said.
You must log in or register to reply here.

P
Business PENGASSAN To Shut Down Activities Over Anti-labour Practices